The Inicat Session will take place at Culture Container in Berlin on September 21. All performances will be recorded by 5 cameras. We will edit the live recordings afterwards so that you can use them for your own promo! Open stage afterwards!

Sounds good? Leave a comment or mail if you want to participate: event@inicat.com

Upload your new songs to your artist page and contact us if you want us to share them via our social channels. 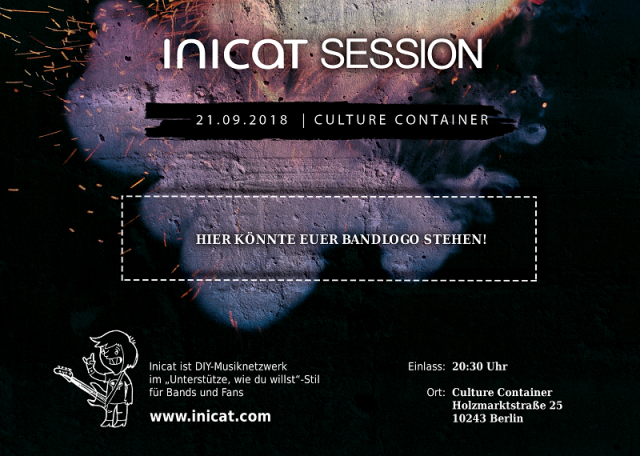 On Saturday next week Karmakab and Stony Sugarskull will be playing the Inicat Session in Berlin. Free entry!

Afterwards there will be an open stage. So, everyone who would like to come by and play can do so. We will even record everything that you will play for free and will also give the video to you for your own promotion.

The Inicat Session will take place at Culture Container in Berlin on August 25. All performances will be recorded by 5 cameras. We will edit the live recordings afterwards so that you can use them for your own promo!

Sounds good? Send us a mail or leave a comment by including a link to your artist page if you want to participate: event@inicat.com

Upload your songs to Inicat so that we can listen to your songs...and we share them via our page if we like them a lot. :) 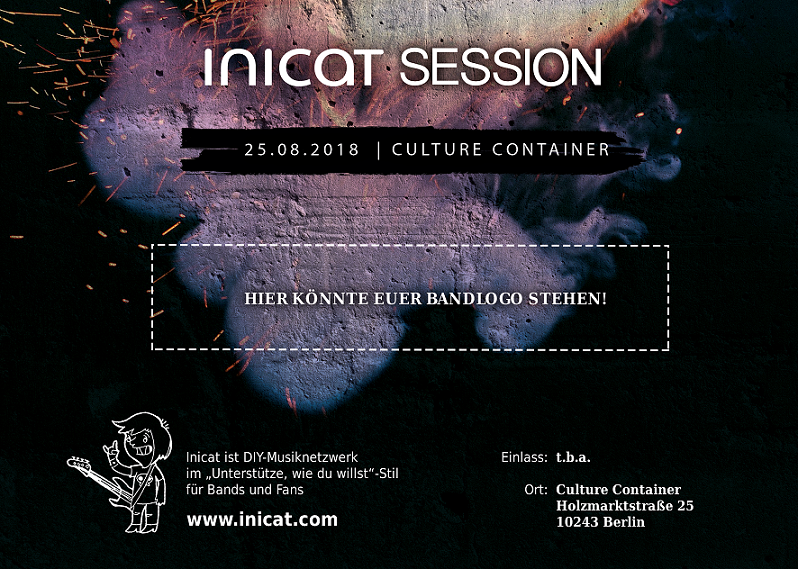 Raphy & Adry, you two are brothers, students of classical music, multi-instrumentalists and play together in one band. How did that happen?

Raphy: In a pretty natural way: since we are brothers, we practiced a lot at home. One Time, seven years ago, I came to Adry's Room with a Riff of ZZ TOP's « Beer Drinkers and Hell Raisers » on the Cello and asked him if he could play the melody of the voice. We still play that song live!

Adry : We grew up listening to our father practice (He is a professional violinist), so we've always been connected to classical music. Also, there was a piano at home so everybody was playing on it.

Since December 2015 there is also a third person in your band: your drummer, Antonio Rivero. Shouldn't your band now be called "Raphy, Adry and Antony"?

Adry: No, it shouldn't because we are a duo, which plays with a drummer. We give a lot of concerts as a duo, and when we play Rock shows, we are more than happy to feature a drummer, like Antonio Rivero.

What and how many different instruments can you play?

Raphy: We both play piano, because in a musical cursus and at the University you have to be able to play it. Also, it is really important to understand the musical theory. My main instrument is the cello, but I also sing and play the guitar in Raphy&Adry. My favorite part is to play the cello and sing at the same time. Sometimes for fun, I play some drums. Adry plays mainly the Alto and Soprano saxophone, but he also plays the keys in Raphy&Adry. On top of that he started recently with the clarinet.

Is there any instrument you would love to learn at some time in the future?

Raphy : Actually we already have enough to do and to practice with all these instruments.

Adry : I've always been attracted to the Trumpet, but like Raphy said, it's enough work like this.

Your latest EP "The Seven Times Down" has been released in March. The songs are basically a mixture of classical sounds with those of Rock, Pop and Funk. During all the writing, rehearsing, performing and recording process of these songs, which were the greatest, funniest or most surprising moments to you?

Raphy : It is an amazing feeling, when you find a great melody in the writing process, because it's a part of yourself: It's yours and that is a very intimate feeling. But some of the songs, like "To Leave Is Not An Option", took me more than a year to write. For example, I had riffs for more than ten years now, and finally we are using it in a song. (Adry laughs)

Adry: For one week we were everyday up to 14 hours in the recording studio. It got pretty intense. One time our sound engineer slowed down the tracks of "To Leave Is Not an Option" and Raphy's Voice sounded like those of the ents in Lord of The Rings. We were all on the ground laughing to the tears.

Some people may argue that nowadays more and more songs are coming short of really original expression and deep meaning since earning money becomes a major aspect of how songs should be written. What is your opinion about that matter and what are you focusing on when writing songs?

Adry: For the moment, we're trying to put all the originality we've got into our songs. Especially nowadays we cannot count on the money by selling songs. We are more than happy if we can earn some money with concerts.

Raphy: I think that it is always deep meaning and originality that has made songs last over time. We are not looking to be in a trend that stays for a year and disappears. We are looking up to all the Rock/Metal/Blues/Jazz and Classical-pioneers that just made their music and put their life into it. My song "To Leave is Not An Option", of which we are going to release a music video soon, is about my torments with the cello and all the problems I have had with it. I had to stop for four years because of Pain and Pressure.

Let's take "Ride On" as an example. How did that song melodically and lyrics-wise come into existence?

Adry : We had a Song called Ride On already four years ago: but it was an instrumental with some of the riffs and melodies of the actual song. It's often like this with our songs, they evolve over time: We have a song, we deconstruct it to keep only the best parts, then build it again with new elements, and so on…(Raphy laughs)

Raphy: The lyrics are about living on the edge, when you burn for something but this passion becomes dangerous, because you can fall off the edge. It's actually a reflection about my state of mind when I had all my problems and was getting crazy trying to play but the pain didn't let me. On the other hand it's also our motto: we have to "ride on" when stuff goes wrong, when we have doubts and when things get bad.

Raphy & Adry…& Antonio, what exciting, original things do you plan on doing in the near future?

Raphy: We are promoting our EP "The Seven Times Down E.P." for the moment and are searching for a management and also a label. Since we are unsigned for the moment, this is the next step for us.

Adry: We have also our third official Music Video of our song "To leave is not an option" coming up: we are going to release it in June 2018. Also we are booked for some concerts, one of them at the French German Price of Journalism at the ZDF Studios in Berlin on July 4 th.

Download "The Seven Times Down E.P." for free: https://inicat.com/music/785